it is no coincidence to me that after days of rain and cloud, the sun shines today. it yawns and stretches through the window to warm me: a stroke on my cheek, a hand holding mine and a pat on the back. hey grandad, we’ve missed you; it has been one slow year since you passed.

amongst many things, my grandad taught me a most important skill: how to peel an orange. 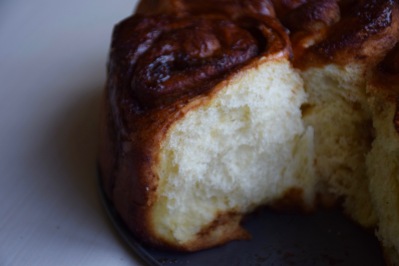 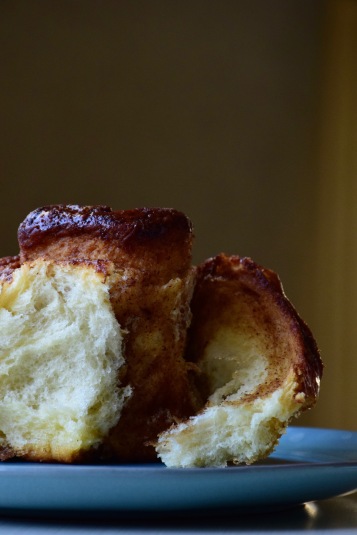 You can now picture me individually cracking open and shelling 25 pods worth of cardamom seeds. I realise an easy solution to this would be to just shimmy in a teaspoon of ground cardamom and be done with it but somehow I believe this would be an injustice to the Scandis and their recipe. After all, the recipe is already a lengthy one so I feel that I should do each step to the best of my ability in order to achieve a royal end result – soft tender buns with buttery, sugary, cinnamony innards and a beautiful waft of cardamom . Cardamom scented finger tips for the next few days is a small price to pay for this. I now add another mark to my cardamom pod tally – I’ve been told 25 cardamom pods for the perfect bun. Therefore, 25 pods it shall be, no more no less. An update: cardamom pod number nine just pinged straight out of my hands, leaving me with just a single strand of little seeds from half the pod. I don’t know where I’m at now. Nine and a half I suppose? Pod number 13: I’ve lost a seed. Pod number 17: a very well-endowed little pod. Have I gone insane yet? 25! The game is afoot!

Now enter the spice grinder as my weak little forearms cant manage the pestle and mortar work. We get by with a little help from our friends, right? You’ll be happy to know that my seeds are now ground and I have just read that my carefully extracted cardamom seeds were not, in fact, supposed to be ground but added whole to infuse in the milk! Deep. Breaths. A very upset baker now returns to her cardamom shelling station, to re-shell, yes — Another — 25 — Cardamom — Pods. 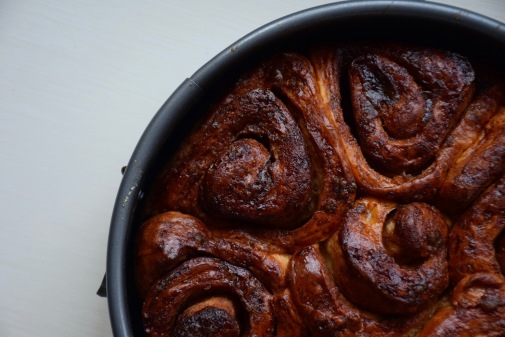 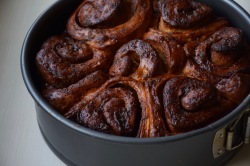 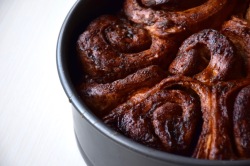 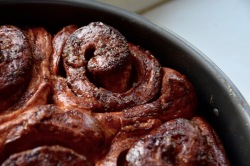 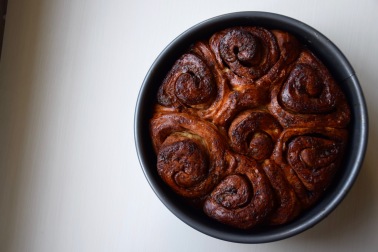 50 cardamom pods down and milk infusing, I’m stirring together my dry ingredients in a bowl. There is something unknowingly lovely about stirring dry ingredients in a bowl with a wooden spoon. It is a comfort to me. The silent swooshing of the dry mixture and the occasional click of the spoon against the side of the bowl. It’s back to basics: a bowl and a spoon, some flour and some sugar, yeast and salt. The offensive clang of a metal spoon and the noisy whirring of an electric mixer are absent. Just swooshes and clicks – that is all.

Little bubbles have started peeking out the top of my pan of milk – it looks like its time for butter!

Although things were looking hopeful, it seems we’ve approached another hurdle: my bowl of very sad and mistreated dough is now sitting in my cold oven with two bowls of hot water sitting on the shelf beneath it in the hopes that they might save it. The dough was sticky and wet and didn’t seem to be getting any happier with my kneading so I broke all the rules and I added a couple more tablespoons of flour and slopped it into the freestanding mixer: maybe the dough hook with its regal ceramic white shine holds the magic touch that I don’t seem to possess. Enter the ruckus of machinery. Is the dough overmixed and overfloured? Stay tuned. Excuse me, while I mope around my kitchen and try to scrape off the remnants of my poor, poor dough from every surface in the kitchen. 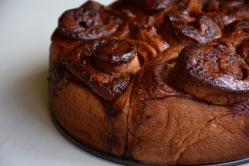 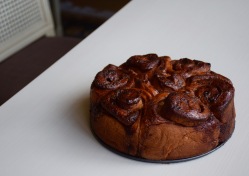 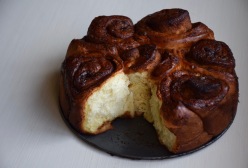 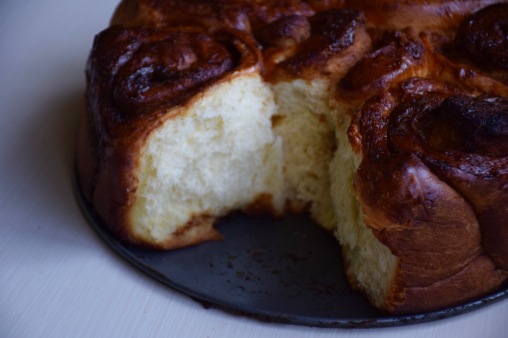 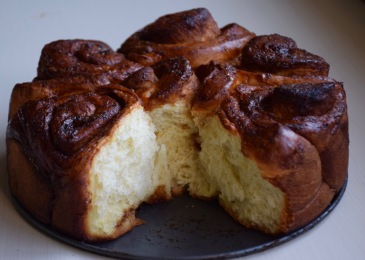 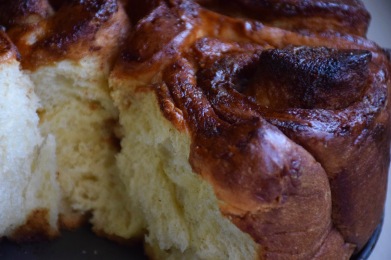 It is the next morning now and I can, with a great, giant smile on my face, and a great, giant (soft, pillowy, well-risen, caramelised) cinnamon bun in my stomach, say that all was a success! With a bit of TLC in the way of steaming bowls of water, teatowel blankets and what I like to think of as a sort of VapoRub for my dough, (cinnamon, sugar, butter) my dough was in good spirits again jumping right out over the rims of my tin to bake into a gloriously golden round.

Seven giant parcels of butter and sugar and cinnamon… The top of the buns are glowing: chewy and caramelised with the soft brown sugar that was sprinkled over the top, which has now melted over the buns and coated them in sweet, sticky stuff. The tall edges are almost fried by the butter that greased the tin, to give a doughnut-feel. The bottom is, again, almost fried; this time not crisp, but soggy with butter and sugar and cinnamon. Ribbons of cardamom-scented dough and heavily cinnamon-ed, salty, sweet butter make up the soft interior of the bun that pulls apart in light golden threads; the swirls remind me of little tummy rolls. 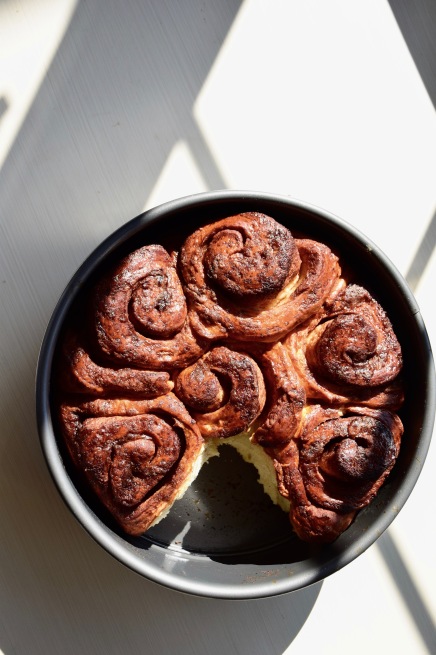 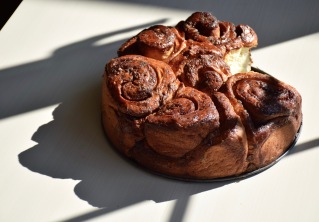 A primitive, messy process: mixing with a spoon and bowl, letting nature do its thing, rolling out dough, smearing sweet cinnamon butter with your hands, (licking said sweet cinnamon butter off fingers), rolling up, slicing up, baking in the oven, then the grand finale… the eating of it. Tearing and sharing; sticky fingers everywhere.